The SEEN FROM SPACE exhibition invites you to take a unique journey to Brittany through exceptional images obtained by Earth observation satellites.

These orbiting satellites are equipped with sensors to provide different types of images of our planet. These snapshots reveal a reality that is difficult to appreciate through the human eye. Optical sensors capture moments similar to photographs but allow us to see beyond the visible. Obtained by radar sensors, black and white prints reveal differences in texture on the surface of the globe. These particular sensors can acquire images through clouds, day or night.

“The waves emitted, either naturally after illumination by the sun or artificially after illumination by radar sensors, contain information translated in the form of images. So, these satellites make it possible to obtain different types of photographs thanks to the ability of the sensors to explore a large part of the electromagnetic spectrum, from microwaves to ultraviolet.”

Professor in the Image and Information Processing Department, IMT Atlantique 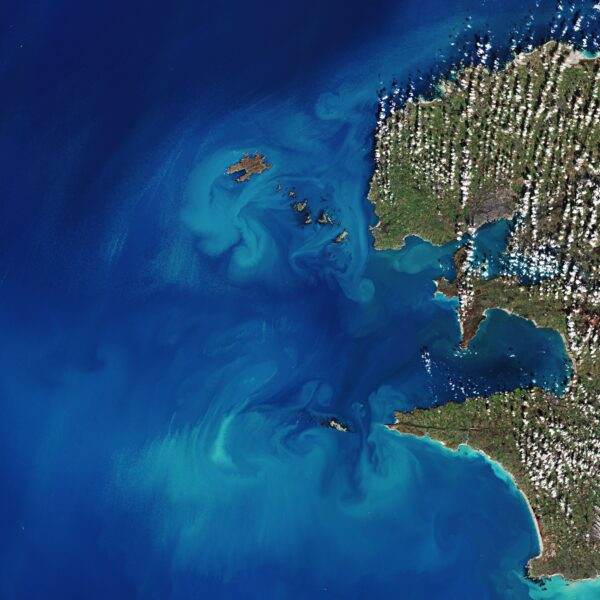 These magnificent snapshots have a great visual power, highlighting environmental and climatic phenomena which are often invisible from the Earth. They also form an abundant source of data for the image processing professions.

Brittany brings together significant scientific expertise for the observation of the Earth from space (universities, engineering schools, research institutes, manufacturers and start-ups). The Bretagne Télédétection group (BreTel) brings together all these partners in order to facilitate collaboration, promoting their skills and work, but also to help other actors to take advantage of these space technologies.

In applied research or for operational applications, the themes explored are numerous and in fields as varied as detecting wetlands, estimating green spaces in cities, developing habitats in rural areas and the properties of the ocean in coastal or offshore areas. These surfaces seen from space generate data that feed the algorithms developed within research and development teams to, for example, monitor ships and oil pollution, but also physical phenomena (winds, waves and currents) and changes due to climate change on continental surfaces (drought, fires, floods, crops etc.).

This exhibition was designed by Marie Jagaille for GIS BreTel (Bretagne Télédétection), with the help of its partners (IMT Atlantique, University of Rennes 2, Ifremer, Ocean Data Lab and CLS), and of the European Space Agency (ESA ). It was funded by the European project CoRdiNet (Copernicus), with the support of Nereus (European network of regions using space technologies) and Océanopolis.

Find the images of the exhibition and more information at www.vudelespace.bzh